For the book series, see The Three Investigators (series) 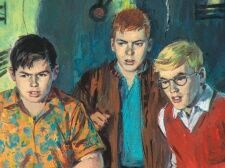 As their motto, "We Investigate Anything", suggested, they were ready to solve any mystery that came to them.[1] After solving the mystery of the appearance of the green ghost, Chief Reynolds of the Rocky Beach police, pleased with them, gave each of them special deputy cards, so that they could have little legimacy, and they would not seem suspicious when trying to solve a case.[2]

For the first month after their formation, they were driven to the places they had to go to investigate, by Worthington in the Rolls-Roys sedan that Jupiter had won in a contest conducted by the Rent-'n'-Ride Auto Rental Company.[1] After the month ended, August August, one of the sleuths' clients, provided them with enough money to continue using the sedan.[3]